Another color run – this one was Amelia Earhart Park in Hialeah, I had never been there before so it was kind of cool to see while running through colorful cornstarch. This run I did with my friends Jenny & German, both were new to this color type of run, last race they did was the Zoo 5k back in February. A few days before I made us each tutus made with tulle & German didn’t protest too much about having to wear a tutu and while running girls kept complimenting him. Haha.

All clean & white in our tutus.

We got to the park pretty early but while lining up we noticed that it looked like rain clouds above us. Everyone was hoping for the best, that it would not rain during this color fest we were about to run through. I have done 2 color fun runs before so naturally I compared them and this one was on the low side since it had no sponsors at all. We were in the first wave so we got to be the first ones out, which I’ve noticed from the February race was a good thing since they would hopefully not run out of color to throw at us before we started. That was not the case with this fun run and we got drenched in color. We ran at a moderately slow pace of around 11-12 minute miles but the ground was quite uneven in spots and nearly twisted my ankle a couple of times. Good thing I wore my Adidas trail running shoes, they probably handled the terrain a lot better than most of the runner’s shoes did. Overall it was a fun experience due to the amount of color tossed on us and the company of friends. After the race they had a mini color toss every 15 minutes or so and we gathered a bit more color.

Colorful at the end!

We left there around 10:45am or so and headed to find somewhere to eat since the clouds were getting darker and we didnt want to get caught in a storm. We got to the Miami Lakes Ale House just as the rain started and had to run yet again, but this time to avoid being totally soaked to get into the place. There were a couple other Color Mania runners there as well. While we were eating it was raining so hard the roof sprung a leak and started leaking right by our table, we laughed and moved to another booth. 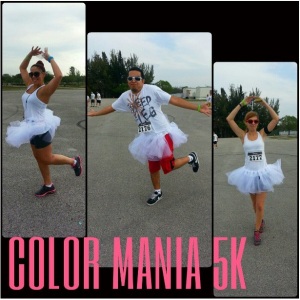 Pic stitch that Jenny made.