Third time doing this race and the course is a little different than last time I did this race, back in 2014. Less twisty turns this year and more A1A. 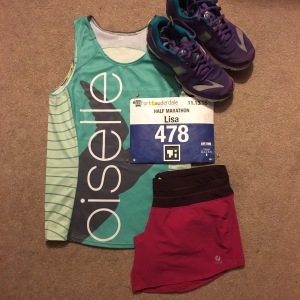 The morning started with a wake up alarm at 3:30am in order to have enough time to get to the race by 5:30am. Once we arrived in the parking lot closest to the starting line I quickly headed to my favorite place to pee before the race, McDonalds across the street. I was not the only one who had this idea this year, apparently people are realizing that it’s better to pee here than in a portapotty! After that I headed quickly to the starting line since the line for the bathroom had taken up a lot of time. There I saw a couple of friends and we took some pics before the race started.

A bag full of Picky Bars!

only 2 seconds off, Garmin.

After the gun had went off I stayed ahead of the 2:00 pacer, I was trying to keep the 1:50 in my view but soon after I lost him in the crowd. Going through the small tunnel is always a fun part of the race since everyone wastes their energy early in the race by screaming and cheering once in there since it echoes. The neighborhood parts were nice and quiet with shade from the large trees which is always a plus in SoFla races. The major flaw that I saw in the race was something that was uncontrollable, mother nature. Apparently it had rained a lot in the past couple of days and there was a lot of standing water in the street, covering the whole road in most places. Treading through water at the 5 mile mark was not a good feeling, I was scared of the possibility of blisters and the squishy sound of wet sneakers around me was oddly gross to me. Anyways I seemed to do pretty well in this race, in fact much better than I expected. At this point in my running I just kind of want to finish a half marathon by the 2 hour mark, funny how only 2 years ago that was my ultimate goal. So much has changed since then, I’m beginning to think that whole “faster after baby” isn’t really a myth after all.

Finishing time was 1:54:37! Somehow I stayed ahead of the 1:55 pacer without even realizing it. Saw a couple of my 1k run club friends before the finish line which helped boost me to the line. After I crossed, I collected my medal, got a pic with Derrick, who finished just a minute before me and went to find the beer. Just kidding, well kind of, I first dropped a Nuun tab into my finish line water and headed to the food tent. Got a banana and a few Picky Bars. I was super stoked to find they were giving out Picky Bars at this race, they are $2 something and only really sold in Trader Joe’s so I made sure to get some for the road. Love those bars, but that’s another post all together. After I had an Ah, Fudge Nuts! Picky Bar I went to the Michelob tent to get my free beer. In the past I have been able to get more than one but they have gotten a bit more strict to only allowing one per beer ticket on the bottom of our bibs, kinda lame. They gave out a nice drawstring bag with white sunglasses and a Michelob Ultra visor, pretty good swag. Anywho I got my beer and had a couple of sips before I just gave up on trying to drink it after the race, I was extremely tired from waking up so early and ready to go. So we looked at the sand sculpture and headed to the buses to take us back to the starting line. These were not the nice a/c buses but school buses, luckily it did not take too long to get back to the car, I did hear a story that one of the bus drivers got lost and took a detour through Ft Lauderdale/Hollywood airport, haha. I had not heard until I had already left the race that there had been a runner hit while on the course, later we found out he died. I do not blame the race directors or volunteers for this as the race was blocked off and nicely directed by the cones but the inconsiderate driver who hit the runner. Unfortunately the police did not charge the driver with any offenses, hopefully this does not happen at any future events. #MilesForArthur