Going into this race I was probably really under trained, well I guess as under trained as one can be 3 weeks after running a marathon. But really I hadn’t been running much in the past few weeks – first was recovering from the marathon week and then taking care of Phoebe with the flu and then getting it myself – so in the time between races I only ran minimally for 2 weeks but not regularly. I ran my longest run since the marathon on the Friday before this race: 7 miles. Maybe there is something to running less and running better or maybe it was just my new shoes and the newness inspiring me. There are so many factors that could have been at play in how I actually did at the race. I really went into this race just trying to survive and if anything get under 2:10 since I was not feeling confident about my pace/endurance.

Packet pick up for this race was the best I have experienced in awhile and one of the locations was close to my house and job, no more racing to Dadeland station to pick up my race stuff a few days before the race. I like that lately more races are having multiple locations for packet pickup to help runners in different parts of Miami. 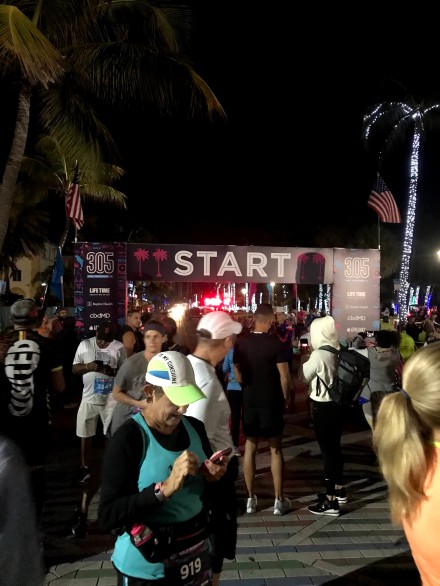 Race morning was chilly enough to wear my earband for at least half of the race and this year I got to wear my arm sleeves, that hardly ever happens for South Florida races, the last time I got to wear arm sleeves for a race was Miami Marathon 2017. The temps were around the low to mid 50s before the race began, I headed to the port o potties before the race, this year they were in the dark, unlike last year. Got to the start line an hour before the race began, talked to a couple of friends before getting into the corral, talked to my Bibrave teammate, Mike before the race also. I did have a giggle at some participants who were wearing puffy jackets in the corral, WOW! I started out fast, as usual and got in front of the 2 hr pacer early on. Then started the bridges, Julia Tuttle, usually I feel really terrible by the time I get to the top of the first bridge but this year for some reason I felt okay and not like I was going to die. By the time I was getting out of the Julia Tuttle bridge I was still feeling pretty decent and it was starting to heat up, I tucked my earband into the back of my shorts and felt the coolness refreshing my sweaty ears.

I didn’t grab too much water and did not even use my Honey Stinger energy chews at all (crazy!) during this race but around mile 6 I got my first sip of water on the course. A few miles later the 2 hr pacer was gaining on me and getting to the water stop was a pain with a rude man cutting in front of me, nearly tripping me to get a water cup. After that water station drama and I got another sip of water I got the hell up that McArthur and away from the pace group and rude man. I didn’t see them again the rest of the race, luckily! But I was getting to the part of the race that I usually start fading but my Bibrave teammate, Mike passed me and that gave me the extra motivation to keep pushing. Mike was making it look easy as he ran ahead of me, wearing his aftershokz and not slowing his even pace, he did speed off a few miles later. At that point I was not going to slow down, I was a mile and a half to the finish line and on the final bridge was one of my favorite runners in South Florida and the mayor of Miami running, Harolyn, cheering us on and if you know her, you love her!

Probably the toughest part of this race for me was the final mile, when you are running on the beach serpentine (our boardwalk) and the sun is way up by then and it starts getting really toasty. I passed the time by watching a team of runners celebrating someone named Lisa’s 50th half? or 50th birthday? And being a Lisa, I took notice of the shirts and eventually I ran into the Lisa who’s own shirt stated : My 50th and congratulated her saying she must be the famous Lisa that I had been reading about along the course. She was happy to be recognized by her friend’s shirts and then I took off, feeding off the happy energy of the moment. In the past few years I have been less focused on my times and more on having fun while on the course, even if that means slowing down to help motivate my friends or cheering on the first place runners (in point to point races). Looking at my watch when I was about .30 from the finish line, a forever endless mile, that last one I was happy to see I would be finishing in less than 2 hrs! The year before I was a few minutes over 2 hrs and the first year of this 3 year series I was a minute under 2:00. I was happily surprise with my 1:58:25 finish time! I made sure to congratulate the girl closest to me after we crossed the line and she congratulated me too and mentioned how she was focusing on my bird shorts to motivate her to the finish line, lol. Love the randomness of that, finding something or someone to focus on to get you through the tough parts of a race. I walked around after and saw Mike after the finish line, unknowing that he had just had a huge PR! Congrats Mike on your first sub 2 half marathon finish!! I took some pics, collected my Florida Storm Series 4 medal and then headed back to the finish line to cheer on friends and strangers before I left. Plus I got to witness the bandits being pulled from the course just before the finish chute and people wearing their bibs on their back (cmon people, so much for those free race pics lol) getting offended when they were questioned about their bibs. I wish less runners had headphones on SO that they would actually hear us cheering them on!! 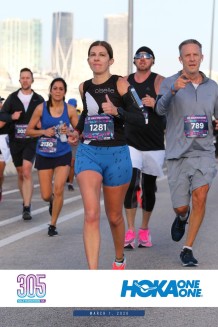 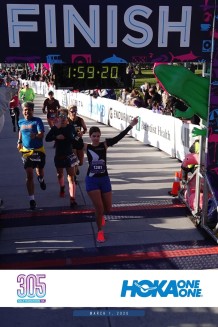 Overall another great experience at 305 Half and cannot wait till next year to start the 3 year series over again! If you are not signed up already, what are you waiting for? The prices are the lowest they will ever be but only until 3/10! Sign up for the only race that gives out cafecitos race morning! I signed up today on 305 day!

Had to stop and take a pic with this cool sidewalk art today on my 3.05 #royo run. Was inspired and went right home to get my family to work on our outside sidewalk. If you have a sidewalk get to work to help your neighbors get a smile on their faces. Our art work in my stories! @themiamimarathon #oisellevolée #bibravepro #sauconykinvara #sidewalkart #chalkart #gratitudemile2020 @thecookierunner
This #Royo was anything but relaxing. I chose a route on streets with no sidewalks to #socialdistance easily but ended up dodging atvs and bicyclists riding 2 ft from me. I screamed “6 ft!” to one teenager. Looks like lunchtime boiling runs are the only way to avoid all this madness. 4 miles done! Still grateful to be able to run outside. #werunmiami #oisellevolée #motherrunner #keepawayfromme #miamiproblems #gratitudemile2020 @thecookierunner
8 #SundayRunday miles - keeping 6ft from all the bros walking while looking at their phones, rescued a little yorkie who ran across a busy avenue to join me (handed back to owner unfortunately) but the streets were generally empty. #socialdistancing #socialdistancerun #werunrun #oisellevolée #flystyle #gratitudemile2020 @thecookierunner
10 neighborhood miles keeping my distance from all the other runner/walker/strollers out. Running during this time of uncertainty is helping me keep my sanity. #coronapocalypse #werunmiami #flystyle #oisellevolée
Social distancing and lunchtime runs are becoming the new norm for me as I started working from home this week. Stay safe out there! #werunmiami #virtualmiamirunclub #oisellevolée #voléefl #flystyle #runch
#305HalfMarathon blog post up on #305day in Miami! Check bio for link 🍌Get the Art Basel 2019 reference on this 1st pic? 😂 #305br #bibchat #305 #miamirunners #werunmiami #oisellevolée #voléefl #motherrunner #freeracepics #flystyle #birdshorts #miamibeach #finishlinepic #kinvara10
%d bloggers like this: