I didn’t sign up for this race till mid summer, when I was still recovering from my myomectomy. I believe at the time I really needed to sign up for this race to help push me to train for another big race. 5k’s and 10ks are easy enough but that first half marathon was a challenge to me. At the time I had no idea why but now that I look back at it I realize it should’ve drank some water and stayed hydrated during the race. Lessons learned loud and clear. This time my aunt came along with me, to cheer her friends on and me during the race. And I didn’t have to check any bag, she was my bag check, carrying my stuff from the starting line to the finish line

starting line in the dark

This race was about an hour away from home so I had to be up pretty early to make it there by 5:30am. Got there in enough time to hit the port a potty line before it got crazy, which happened about 15 minutes before the race. My plan was to hopefully PR but that was not in the cards. The morning was cool considering the normal 80 degree temps and also overcast, I was slightly worried that it might rain. It did not rain at all and became pretty sunny halfway through the race. I was hoping to stick with the 2:00 pacer and beat my previous half marathon time but he started out way too quickly and I could not keep up. At that point I just hoped to run the whole way but stopping at water stops to walk through them. Running through a tunnel in the city was pretty interesting as most of the runners started screaming and making noise to get it to echo off the walls. The wind was so intense at this race & affected a lot of times. I know that I worried a bit about being blown off my feet by it a couple of times. Running along Fort Lauderdale beach was a great view though, it’s so lovely to see the sun starting to rise above the water. There were also a lot of kite boarders in the water so when I started to slow down I looked over to check out them to distract myself. I knew this race would not be my best but I powered through it and thought about other things. I probably stopped at 6 of the 12 water stations on the course so I was not feeling so horrible when I crossed the finish line. Right after I found my aunt I threw a Nuun tablet into my water bottle and felt even better. My friend German drove up to hang out at the beach and when I went to the beer tent to get a free beer he came along and got some free beers too. They were giving 2 beers per person at the time, I didn’t even finish one of my beers but it did taste pretty refreshing at 9am. Michelob Ultra in case you were wondering. This was the first race in the Florida Storm Series for this season, meaning you gain more medals the more halfs/fulls you complete in one season, up to 5 big races and a giant 5 medal if you complete all 5. I signed up for 3 races this season so I will be gaining a 3 medal in March. This race was dedicated to my friend Priscilla whom is having a high risk pregnancy. 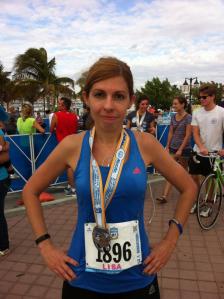