Running this race on Thanksgiving Day morning has become a tradition for me, been running this race since 2012, the first year I started running. The first year I only ran the 5k and since then I have ran the 10k. Phoebe has already done this race twice now. Last year it was horribly rainy and although it started out a little drizzly it cleared up before the race began. I was crossing my fingers that I would not have to run the stroller through massive puddles again. I got to the race site early and met up with some of the other ladies in Every Mother Counts South Florida team. Parking is always a bit of a problem for this race but if you get to the site an hour early its a breeze, everyone else is stressing out and you are parked and can relax a bit. 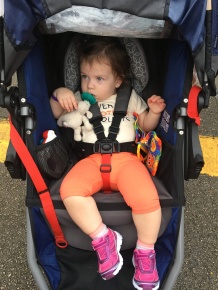 I had the rain guard over the stroller for most of the run since the weather was sprinkly most of the way. But towards the end, in the last mile I believe I was able to lift the weather guard so Phoebe could get some fresh air since it was not raining anymore. A few years ago this race was very chilly, in the 50s but this year it was unseasonably warm. I like the out and back way of this course so you can cheer on and get cheered on by friends passing by. I finished at a respectable 54:36, which 6 minutes faster than last year’s time. There was a bit of clogging in the finisher chute, due to the race backdrop with photographers too close by. I can always expect some sort of line there but this year it was insanely long and I ended up slightly bumping someone as I tried to get through the crowd to get out into the open again. This guy ended up screaming at me for bumping into him and saying I need to pay more attention and not run over people. Very, very rude participant all because of the overcrowding in the area. Phoebe remained sleeping through it all and was finally able to escape the rude guy and the crowd. I met up with Derrick and some of our friends from the 1k run club and then we walked over to the Every Mother Counts tent to see everyone there. After some time there we headed to the food tents and I stocked up on the Picky Bars?! Again, at another local event! Never have I been so happy with the food options at a Lifetime Fitness event. Overall, another great Turkey Day race with my little running partner.