This race distance was new this year for this event, usually it is only the half marathon distance and I was not sure of my ability to run two half marathons so closely. When I found out they had a 4 mile race I thought it would be fun since I had never done a 4 mile race, and since most of my weekday runs are 4 miles I knew it would be easily doable. Plus the aspect of dressing up in a Halloween costume and running was a good combo. Took some time to figure out what I would wear that I could run in. I chose a gladiator costume that was short enough to wear a running skirt underneath and easy to run in (did a very short test run in my backyard to test this). 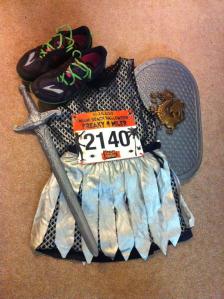 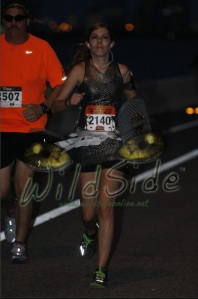 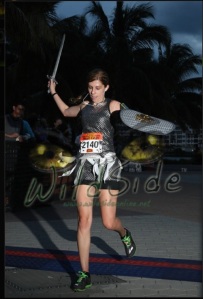 Finishing with my sword out!

I was just unsure about the whole carrying a shield and sword throughout the race. I came up with the idea of putting the sword in a loop on my skirt and holding only the shield to run till the end when I would whip the sword out for the finish line photo. I have to say that idea really worked except for the fact that it was a very windy morning which was not ideal for running with a shield that was determined to hold me back. I ran the 4 miler pretty quickly despite my pace being  a minute slower than normal. I lost the headband that came with my costume on the first mile, it was that windy! After the race there were buses to transport everyone back to their cars but they said it would be awhile before they left so I took a little walk down to the sand. When I was starting to walk back to the finish line and bus area I got to see the first female half marathoner finish. I love finishing races at the beach because there’s nothing like walking out onto the sand after a race and just seeing the calming ocean to relax you. I couldn’t stay too long after this race because I had to race home and get ready for my friend’s bridal shower. 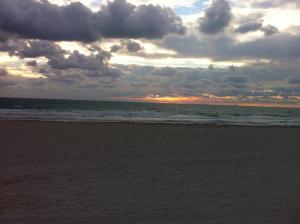 The beach is the best finish line.

This was also the race that I decided to start dedicating my races to my friends. It really helps me stay focused and keep going despite my mind telling me to stop and walk. This race was dedicated to Gio. 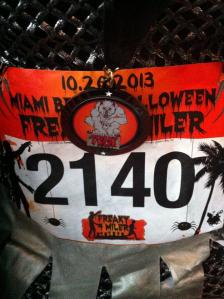