I never thought I would a women’s only race especially with a very girly aspect but I figured why not do something different.There was a whole lot of pink involved as you can imagine. 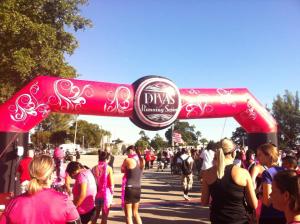 It’s not everyday that you finish a race wearing a tiara and boa to be handed a rose and a flute of champagne. Also this race had a finisher’s medal so that helped since I started getting medal crazy towards the end of the year. I was in the first wave so I had to line up pretty quickly and also felt pretty good about being in the first wave. I never thought I would be fast enough to be in the first wave of any race. As soon as the race started we were off and for half a mile I was in the fast pack, about 6th woman back, I felt like Kara Goucher for that moment, being so close to first place. It was a great feeling to be so far in the front. Towards the end of the course is where we ran through a group of kids handing out the tiaras and boas, probably the last half mile from the finish line. I quickly put the tiara  & boa on as best as I could without losing too much momentum.

I didn’t mind the tiara too much but that boa got very hot very quickly and started to feel like a boa constrictor on my neck. Was 14th overall and 2nd place in my age group. It was the 2nd time I had ever placed in my age group so I was super excited. But I didn’t know I had placed till the awards ceremony when they called my name! By that time I had met some other women and had been talking to them about some races and when they announced my name they all cheered for me. Thank you awesome strangers! Along with the 2nd place medal I also got a certificate for laser hair removal. Haha. At least I did not place 1st in my age group, that prize was Botox. It was quite an interesting and different race but champagne is not really such a refreshing drink for right after a speedy 5k. Afterwards I went home and watched the elites finish in the New York Marathon. Also I would like to say, those Adidas capris seem to be my lucky pants, every time I wear them for a race I place. Perhaps I need to wear them more often!

Champagne & rose at the end.

Best podium pic (I have my eyes open!) 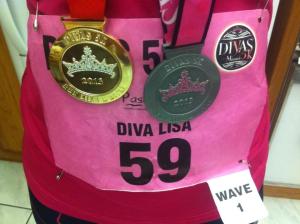 Close up of the medals, because that’s why you clicked on this post, right?