When I first started running in 2012 I actually started running in Adidas shoes. They were cheap Adidas ClimaCool Oscillation running shoes and Adidas trail running shoes that I found on a website for a good deal. I didn’t really know the reasoning for paying more for a better running shoes. I used to think that getting shin splints were because of increasing mileage and maybe at the time it was partially the reason. Later I found another brand of running shoes and paid more for better quality. I hadn’t gone back to trying out Adidas running shoes though and I had always wanted to try out another pair. I have often seen some super speedy local runners wearing Adidas Boosts and was curious to see how they would work for me, or not. When the opportunity arose I jumped at the chance to try out these new Adidas.

I got them in the mail a day before I arrived home from my vacation in Aruba so I was excited to arrive home to a large Adidas box! First thoughts were: Wow, these shoes are very lightweight and cushy. I had never tried any of the knitted style running shoes and they really do fit like a sock. I always wore a pair of socks with them when running but right out of the box I tried them on without socks. Just walking around the house at first I could feel the squishy Boost base. Also the heel has a cup that keeps your foot stable while running/working out. I thought it would bother me since the rest of the shoe is very flexible but I did not even notice it while using them.

First run: 4 miles – First 2 miles felt like running on clouds, after a mile I felt a bit of shin discomfort. I figured it was because I hadn’t really been running on the road for a week since I was on vacation and most of my runs were on dirt roads. That week I was in taper mode for my first ultra, a 50k race.

Next run: 3.5 miles – Post 50k dilemma I was less inspired to run much that week but still managed some miles in the new UltraBoostX. Due to the extreme heat (record breaking actually) my run became more of a run/walk so I wouldn’t pass out from a heat stroke. Again I felt some shin issues. It was then that I researched more about these shoes and discovered the heel/toe drop is the conventional 10 millimeters and I have been running in minimalist low drop (3-4) shoes for the past 4 years now. So going to a higher drop shoe puts a lot of pressure on my shins and these shoes only succeed in giving me shin issues. I can use these shoes for fast short runs on treadmills or tracks where the ground is softer but pavement and longer distances have proven to cause shin splints in me at least. I think that for someone that is used to higher drop shoes, these would feel like running on clouds with that Boost base but for me they just don’t seem to work. They seem to work for short fast mileage though so maybe for a fast track run. This is after running in these shoes after around 50 miles and 3 weeks of use.

For Cross training: I tried them out with a popular workout app that I use pretty often from another shoe brand. The results were that they were very comfy for jumping jacks and jumping exercises in general. I felt the cushy Boost especially well and I did not have any shin split issues. 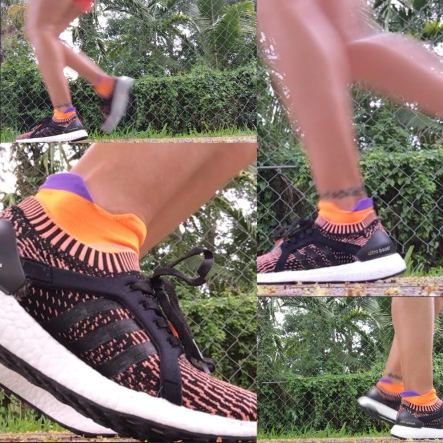 My verdict is : These shoes are very attractive and work well for short runs/ Hiit style workouts. They didn’t work for me for significant distance runs but for short sprints they perform very well. If you have ever wanted a shoe that cocoons your foot and hugs your arch, these are the shoes for you.