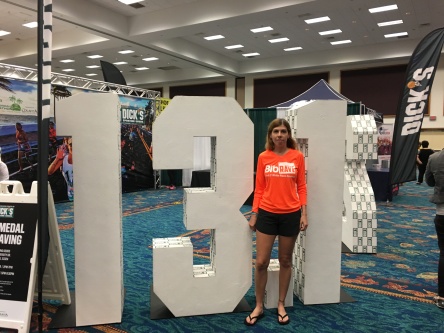 So since about Tuesday night I hadn’t ran since I seemed to pick up this horrible virus/cold/bad germs from my toddler with the idea that a lot of rest would heal me up before race day. Off I headed to the race expo, which is about a 45 minute drive away from my house with my toddler. I did not anticipate the traffic getting into Port Everglades and I had never been there since I have never been on a cruise. Major traffic right at the entrance, unknowing that there is another entrance to the convention center, I just went where my apple maps told me to go. I pulled into a massive parking garage with no real signage about pricing on the outside (I didn’t see anything) but with a ticket to take when parking. I had only planned to spend an hour or less anyways so figured if there was a fee it would be a low rate since I was barely there.

First con of the expo: paying to park to get your race packet. Or maybe sharing a garage with lots of overnight parked vehicles. It was somewhat difficult to find parking and pretty dark, not something I like to do with my kid in a stroller, just doesn’t seem safe. I think that in the future it would be nice if they could have some sort of discount or fee waived for packet pickup vehicles if they show their bib at the end. I was very surprised when pulling out of the garage to finally see pricing in tiny print on the cashier window. 0-1 = $3, 1-3 hrs = $6! So I basically paid $6 to park for a little over an hour! Pretty ridiculous, in other race expos I have paid way less for more time spent looking around at the vendors. I was hardly there because after 30 minutes or so I was starting to feel very weak due to being sick and needed to leave.

Actual packet pick was so easy, there was no line for my last name initial and got my bib and shirt in a minute or less. Everyone was nice and fast, no issue here. In fact I would say this was one of my pros of this expo: speedy packet pickup. If I wasn’t interested in looking around and taking some pictures I would have been out of there in 15 minutes or less, which would be good for someone in a rush.

Backing up to as soon as I stepped into the expo, there was some massage tables and people getting massages to the right of the entrance and some Lexus cars to the right. One of which was wrapped in all the participants name, which was pretty cool in my opinion. I found my name quickly and got a pic with it. As soon as I was done I walked right to the pack of the room and picked up my race packet. There were plenty of volunteers helping direct runners and visitors, which was nice and helpful. Usually expos are such a huge mess of everyone crowding around certain booths and just generally a headache. This one was set up well with enough space for me to push a stroller through without any issues. 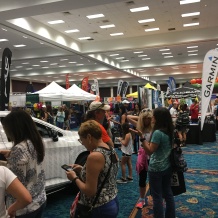 As soon as you walk in. 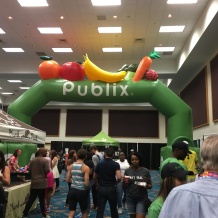 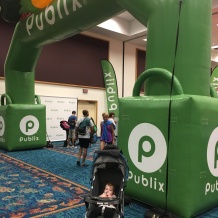 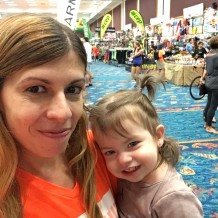 I walked through every aisle, checking out different booths with other race info and tried to hit up a couple of photo ops in the process. Also got to try a few new things, one that really stood out was the Yasso Frozen Yogurt booth, where I got to try a chocolate chip yogurt bar. Yummy, and of course I shared some with my toddler because I did not want a meltdown to happen. They also gave me some coupons, which I used when I went to Publix right after the expo to get some groceries. I love finding new food favorites at race expos. There were a few more things and some wheels to spin to win certain things. I spun the wheel at the Publix booth and chose a snack container because with a toddler, snack time is all the time! 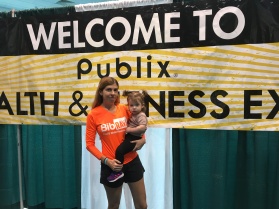 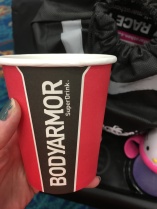 Already a fan of the fruit punch flavor

Another pro of the expo was the cool 13.1 and 26.2 signs that were set up so runners and their families could take pictures by. I liked that and liked it even more that I didn’t have to wait in line to get a pic with them. I didn’t realize till later that there was a wall behind that for runners to sign their name and write things on, I missed that part.

How I got her to stay up there I will never know!

Found my name on the Lexus

I would say that the expo had a lot of pros but a few cons like the parking fee situation. I did not collect as many freebies as are available at some expos but I really do not need any more junk. I have enough plastic promotional water bottles to last me a lifetime at this point!

Other goodies I found at the expo

The night before the race I kept going back and forth about whether it was smart to run the race while still feeling very sick and congested. The decision was made for me when my daughter kept waking up multiple times during the night and even after giving her tylenol to get her fever to go away, the temps kept spiking to the temp of 102.9. It was at that point that I said it was not safe for me to run in my current health plus I was going to have to take my baby to the ER to get her high fever checked out. So at 3am I made the decision and a few hours later when the fever was still very high I took my daughter to the children’s hospital to get checked out. Her diagnosis was upper respiratory infection with the beginning of an ear infection. I have since been to get checked out myself and they are ruling what I have as an upper respiratory infection with some water in my ears. My recommendation from the dr has been rest and lots of hydration as well as an inhaler to get rid of this cough. Luckily I have been doing that because I really, really want to get better and miss running.

My planned attire for the A1A half marathon and race bib.

Sunday afternoon I spent having some serious FOMO about those A1A race medals but also reading about multiple incidents of people needing medical help from the hot and humid conditions for the race. Still sad I had to miss the race but there’s always next year!

Disclaimer: I received a free entry to A1A Half Marathon as part of being a BibRave Pro. Learn more about becoming a BibRave Pro (ambassador), and check out BibRave.com to review find and write race reviews!