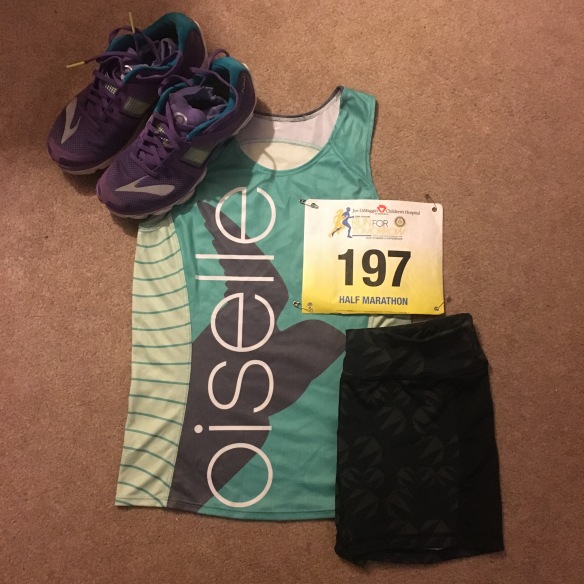 The whole reason I signed up for this race is because the West Palm Beach half marathon was cancelled this year and I really wanted to do a half marathon in December. I went into this half marathon with only one goal: under 2 hours. The weather was looking to be rainy all that weekend and it had started the Friday before. Even at packet pickup which was held in the same park beside where the race started it was drizzly. Running races in the rain is not something that makes me happy, chaffing usually happens and sometimes I even get sick afterwards. Packet pickup was a breeze, I brought Phoebe along with me and we ended up getting a vanilla bean frapp at a nearby Starbucks after. It was one of the fastest packet pickups that I had ever been to, literally I got out of my car and collected my bib in less than 2 minutes! Anyhow I spent the rest of the day trying to rest my legs but failing miserably as I chose to go by Target on the way home and get some Christmas shopping.

Race morning I woke up very early because the race was a bit farther from my house than usual, about a 45 minute drive to Weston. I got there an hour early and was able to use the port-a-potties before the race started. And these were were some very nice port-a-potties, that is one sentence I never thought I would write. LOL. PortaJane was the name of the company and all the potties were pink! They all had a small light, which is much needed when navigating those things, a mirror (haha) and a sink with running water by pushing down a foot pedal. And the toilet was flushable too, think a toilet in a motor home, it was just like that! As you can see I was pretty impressed with the bathroom options at this race, which is rare. Anyways back to the race stuff, Everyone lined up pretty well at this race which is a pet peeve of mine when a bunch of little kids or run/walkers line up in the front and I have to dodge and jump over them at the start. 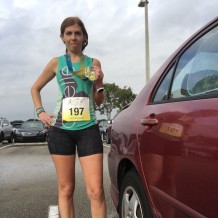 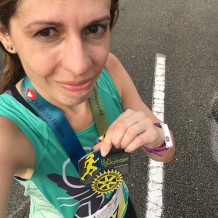 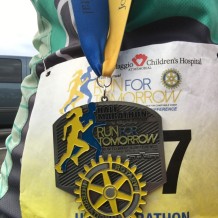 I heard some complains about the course afterwards and although it wasn’t scenic like some of the other races in the past, it was easy and clearly marked. It was an out and back course in the shape of an L and as far as I heard no one got lost. Most of the time I enjoy out and back courses because I can see faster or slower friends somewhere along the course and be able to cheer them on but sometimes it does make me feel a little dizzy if I focus too much on finding people in the crowd.

It was overcast and drizzly for the whole race. No big downpours but just drizzly light rain the entire 13.1 miles, my feet were soaked by the end but I didn’t really notice it at the beginning. Thanks to feetures socks I didn’t acquire any blisters during the race. After I crossed the finish line and collected my medal I walked over to the covered patio of the high school where they were serving food. I now regret not trying the vegetarian breakfast wrap but I generally don’t trust things being handed out by high schoolers. I got a muffin and a banana and headed to the car to change out of my soggy shoes and replace my soaked singlet with a tee shirt for the drive home. I would definitely sign up for this race again, it had a smooth packet pickup, good bathroom facilities and a very easy course.

Later that afternoon I had to refuel and figured the best way would be to go to Jaxson’s Ice Cream parlour with Phoebe and some friends for a gigantic sundae! It was a good ending to my Sunday.