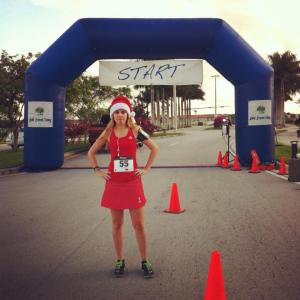 Onward to race #2 for the day. This race is actually really special to me because it is the first race my parents have ever attended. Arrived early at Baptist Hospital in Homestead, where the starting line was. I decided to be festive for this race and wear a santa hat, which I later realized was a dumb idea since it was over 80 degrees out and my head needs to breathe. About a mile into the race I just wanted to rip the hat off but kept it on for finish line photos. Convinced a friend from run club to run this race and ended up running it with him the whole time. We are used to running the same pace at run club so the goal was to stay with him and kick up the pace at the finish line. I talked most of the way, not that he could probably hear me as he was wearing headphones but still kept my mind from focusing on the pain of running so quickly. I even mentioned that we might actually place high in our age group when we were about a mile from the finish line. Well I set a new 5k PR that day and placed 1st in my age group. The first time ever being 1st! Plus we set a course record for our age groups as it was the first race on that course and the first year of this race. Never had I felt more high from racing than that moment, plus my parents and grandmother were there to see it happen. We got Christmas ornaments with the race info on it at the finish line. There was also free local craft beers but I did not partake in those this time, but I did have some pizza from The Big Cheese when I went into the YMCA for the awards ceremony afterwards. After carbing up and getting my medal I headed home to change and get ready to go out with some friends for a night of dancing. This race was dedicated to Angelika, who loves all things Christmas related. 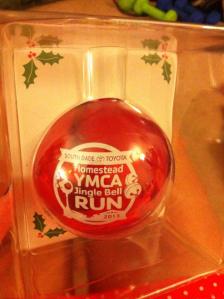 Close up of medal & my cute polka dot running skirt.