I decided to get to the race an hour early, I’m usually early but not quite that early usually. I arrived in Coral Gables just as they were setting up their booths to hand out the race bibs. So I picked up my race bib and walked around a bit. A guy was walking around trying to get people to take a survey and they would get a neat bag that is good for cycling so I decided to take the survey. It took about 5 minutes and it was about an MS medication, I had just met someone a few months before that actually has MS so I learned a little about the disease that morning. I put all my stuff back in my car and prepared for the 8am start time. A late start in my opinion, I’m used to 7-7:30am start times since the weather here is so hot & humid by 8am. I lined up and was a little bit nervous since I had never run this course, but had biked a part of it a few years before.

Starting out it felt like every other 5k I’ve done, I started out really quickly, but this time I didn’t stop to walk at all. Finally I was running like I have been doing in my training runs for awhile now. Passing so many people really gave me a confidence boost, but what was better was the mile timers that showed me I was really going fast! The course led around a golf course and then through a neighborhood. First part of the race was done in the shade of all the lovely Coral Gables trees but the second half was sun glaring in the eyes to the finish line. When I ran through the finish I knew I had PR’ed but what I did not realize was that I had won an age group award! Never did I think that I would win any medals besides finisher medals. But after I walked around a bit, drinking water I decided to go look at the stats they were posting on the wall of the nearby City Hall. I was shocked and overwhelmed when I realized that I had placed 3rd in my age group!!! Best running moment ever. Only thing that sucked was that I couldn’t share the moment with any friends or family. I’m hoping that one day my family shows up to see what joy running truly gives me. 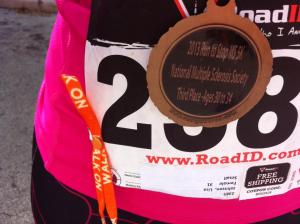 Picture of my 3rd place medal.