Disclaimer: I received an Road ID wrist ID to review as part of being a BibRave Pro. Learn more about becoming a BibRave Pro (ambassador), and check out BibRave.com to review, find, and write race reviews! 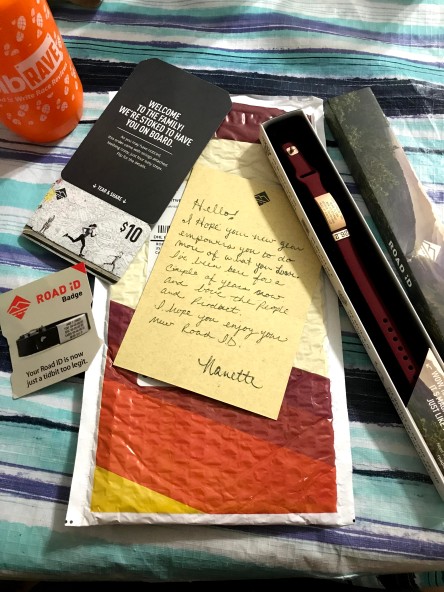 I have been wearing a Road ID since 2013, less than a year after I started running I made sure to purchase one. At the time I did not see too many runners wearing them but I wanted to be safe since I was running a lot on my own at dark o clock before work. I remember the first event I wore my Road ID ironically enough I did not even run it, I walked a Mercedes Benz Corporate Run 5k.

Since purchasing my first Road Id back in 2013, I purchased another one in 2014 to update the emergency call numbers and get an updated color. My original band was the silicone stretch band and I got it in black, when I updated I got it in a teal color and continued wearing that one (nonstop) till I received this new style. Another way to add a little flare to your wrist ID is to add a badge, they have a bunch of kinds and metal colors. You can see my previous band had a saturn badge, that is not currently available but maybe in the future they will bring it back and in a rose gold. Crossing my fingers, for that one 🙂

I wanted to branch out with my new Road ID and try out a different style so I selected a 13mm rose gold pin tuck wrist ID band. Usually I am not a gold wearing lady but I have lately been intrigued by the rose gold color so I went with it instead of my usual silver colored metals (or slate according to road ID). Right out of the box I could tell this band was more grown up and professional than the regular silicone band I had been previously using. It looks classy and is functional, I like my running gear to have both of those qualities! I was also looking at the leather buckle band but for ethical reasons (vegetarian/vegan) I passed but it did look nice, if there would be a faux leather band I may have selected that one.

I’m sure most users of Road ID just put it on when they are going for a run/ride but I wear mine all the time. I don’t want to forget to put it on plus something could happen anywhere, not just while I am running and I want the emergency personnel to know my info in case there is no one around that knows my name or info. I can imagine going to a grocery store and something bizarre happening and passing out and at least the workers/emts can contact someone from the two numbers listed while I am in an ambulance.

This is one piece of running gear that is a necessity in my opinion, especially while running on the road in crazy distracted driver territory, which is all of Miami! I know that some people may carry there license while running but I do not find it necessary as long as I am wearing my road ID. I haven’t ever had any issues of weakening silicone or turning of colors on the information plate of these either so they are super durable. I wear mine in pools and showers and is still looks new. After all this time of wearing it nonstop it has only came off once while I was sleeping since it is a pin tuck latch. 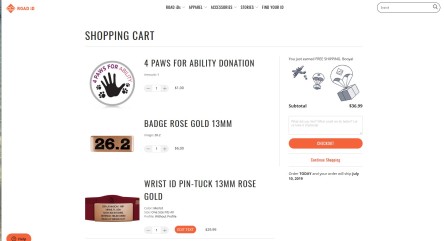 Also while checking out at RoadID.com you have the option of making a donation to the 4 Paws for Ability charity which provides service dogs to children in need. How awesome is that? Donating to a great cause while getting a wrist ID to keep yourself safe while out.

Comment below with other ways you stay safe on the run and I will randomly select a comment and provide  a $10 off code for one lucky reader to get their own Road ID!